After a nearly 2-month absence from the blog, we’re back with an update.   Here’s what’s been going on…

Following our travels through California’s wine country in March with our friends from Vancouver Island, we were convinced (induced with alcohol really) to begin our house hunting exercise in BC’s capital, Victoria.  We’ve always enjoyed visiting the island but we didn’t seriously consider living there because of the ferries – they’re a pain.  But hearing all the good things about island life, we decided we wouldn’t have to leave all that often so thought we’d have a look.

In early April, we crossed from Washington State directly to the island aboard a US ferry. Interestingly, on the day we crossed, all BC ferries were cancelled due to high winds, but not the Black Ball Ferry Line from Port Angeles to Victoria, apparently it goes no matter what.

As soon as the ferry left port, the side-to-side swaying began and Mama Bear took on a particularly ghoulish lime shade of green.  This wasn’t a strong selling point for island living!  We arrived and stayed with our friends the Rodfords, who were the main protagonists in marketing all the great things windy Victoria had to offer.  We spent 6 days searching real estate listings, meeting with an agent, going to open houses and scheduling appointments to see any that were of interest.  In the end, nothing fit the bill. Over the past year, Victoria’s housing market went up 30% and was one of the hottest in the country.  Hundred-year-old houses requiring many upgrades were going for $100,000 over asking!  It was nuts so we thanked the Rodfords and our other island friends who we visited and moved on to Kelowna.

Kelowna is situated in the BC interior about 4 hours from Vancouver, on the shores of Okanagan Lake and in the heart of wine country.   It’s a beautiful setting with a mountain backdrop and something of a summer resort town.  We arrived and spent 4 full days checking out listings and open houses.  We quickly discovered that you get a much better house in Kelowna for the same money, but it was a smaller city than Victoria, and most houses were out of town and up on mountain slopes, requiring a car (or two).  We were still hoping to find something within walking distance to amenities.

So off we went, back to Victoria.  This time, we really rolled up our sleeves and decided to explore every corner in hopes of finding a decent house (we were giving up on a ‘perfect’ house).   Ten days and 22 houses later – nothing.  The spring inventory was really low and anything reasonable sold immediately, often way over the asking price.   The thrill of travelling had now worn off and stationary living in an RV while shopping for a house was becoming less appealing by the day.

So feeling somewhat schizophrenic about locations, we crossed the frigging ferry again ($130) and made our way back to Kelowna.  Mama Bear’s family, including the ornery old mother-in-law, was flying in to celebrate her 50th birthday.  So with that event as a major distraction, we thought house hunting would be put on hold for a week or so.

But right on Mama Bear’s birthday, while showing her family the area in Kelowna we liked – including a surprise visit from our friends, The Lesbians – we came across a new house for sale, 50 yards from Okanagan Lake, an 8 minute walk to a brewery and coffee shops, and 15 minutes to downtown.  It was still under construction but the workers on site were happy to let us in to have a look around.

We won’t bore you with all the details but after 3 more visits and some tough negotiations, we bought ourselves a new house!   Best of all, we had them include an RV parking pad alongside the house so MaBel will have a good resting place.  The Bear also seems to approve, particularly the short stroll to the beach for daily swims.  That said, Okanagan Lake is currently rising to unprecedented levels and there’s flooding everywhere.  We think the new house will be okay, but just in case, the Bear has been on flood patrol. 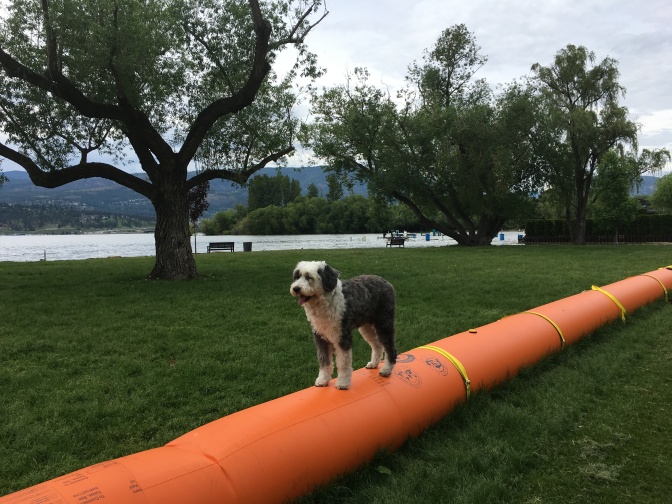 As of now, our road trip has officially crossed over the yearlong mark but we should be sleeping in a bed (not on wheels) within the next month or so.  It’s probably time… A year on the road in a 25-foot motorhome has been great but its back to reality.  Papa Bear has to find a job to pay for this damn house.   Thanks once again to our family and friends for all the support.  We should be set up by the fall and you’re all invited!   Just steer clear of Thanksgiving; the gassy-arsed mother-in-law and Opa have already booked their flights.

5 thoughts on “Homeless no more!”