San Diego marked the end of our western advance, as we turned northward for the long trek up the coast.  We’d been lucky with sunny weather in SD but as we got on the highway, the forecast was for severe rainstorms.  We toured through La Holla then settled into an oceanside campground, San Elijo State Beach, near Cardiff by the Sea.  We decided to stay put, which was a good choice because wind and heavy rain hammered us the entire next day.  This is when a relationship is really put to the test – hanging out in 30 square feet for 24 hours with a wet sheepdog, coupled with a poorly-timed temporary vow of sobriety after all the margarita madness (see last post).  But looking out at all the sideways-leaning soggy tents made us very grateful that we had MaBel and all the comforts.  It was a one-day deluge then the sun came back out.

We moved on through Carlsbad and Laguna Beach, settling in at Crystal Cove State Park for the next 3 nights.  This was a terrific campground, other than having our chairs stolen by the hippy camper in the next site (Mama Bear tactfully retrieved them along with an apology).  It was a good location to stage from – there were good beach communities north and south.  Here’s the view from site 59.

Mama Bear started off the next day with a new doo at a stylish salon back in Laguna Beach. Interestingly, when she first inquired about an appointment, the gal at the front desk said there was a 4 week wait.  Really? A month?  But sensing that the local clientele was a bit flakey, she gave her number and sure enough there was a cancellation just a few hours later. 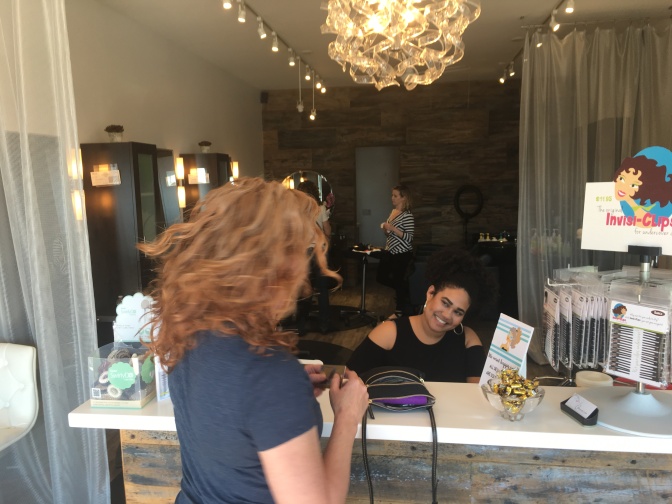 Giddy with the exhilarating effect of a $160 haircut, Mama Bear went on a 2-day shopping bender through Fashion Island, a massive circular complex of high-end stores in Newport Beach.   All the while, Papa Bear sat quietly with the Bear having the equivalent of meat sweats thinking about the Visa bill. In the end, MB came away with 4 pairs of shoes, 2 pairs of jeans, new glasses, towels and another pillow (which at last count was 15 in the RV…)

We later toured through the Crystal Cove Historic District, which is now managed by the State Park.  The Historic District features about 40 vintage cottages for rent, the famous Beachcomber restaurant, and interestingly, this location has been the site of several movie backdrops, including Gilligan’s Island and Beaches.  The Bear decided to play the part of Bette Midler…

The next day, we walked around nearby Balboa Island.  The island (2.5 miles around) is very densely populated with ritzy homes and seaside cottages, along with a strip of shops and restaurants down the center.  There’s obviously a bit of money here as we strolled by multimillion dollar dwellings and women with bad plastic surgery.  We indulged in one of the local delicacies – a dipped frozen banana, which not surprisingly, tasted pretty much as you’d expect if you accidentally left the bananas outside in the winter, then added some chocolate and nuts… 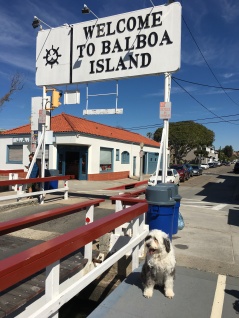 We left Crystal Cove S.P. and drove 10 miles up Highway 1 to Huntington Beach.  At the turn of the last century, HB was a small, quiet seaside town until oil was discovered in the 1920s and the town grew from 1,500 to over 5,000 overnight.  Then in the sixties, HB earned the nickname ‘Surf City’ partly due to Jan and Dean’s hit song of the same name. Many surf legends made their name at Huntington Beach and today its home to the US Open of Surfing. 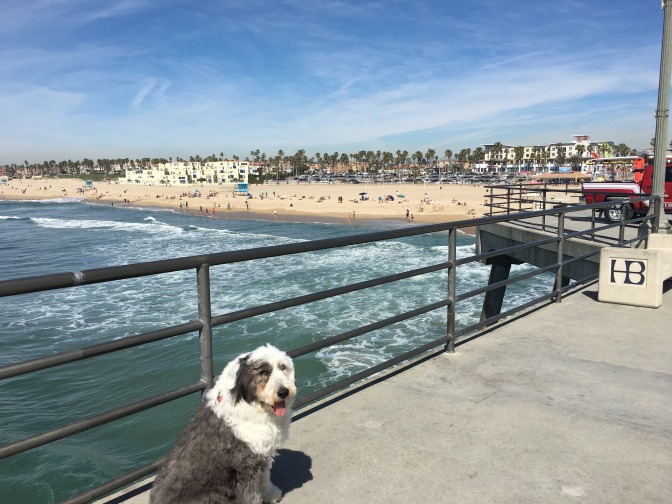 It was a hot day (80F) so we thought we’d take our time to tour around the pier, beach and town, then stay at another state park just a few miles north.  But when we got there, it was full so we decided to press on.  That was a bad decision.  It was midafternoon on Friday and we were heading into the eye-popping traffic vortex that swirls around LA.  After 3 hours of heavy congestion, we ended up at Malibu Creek State Park, which was inland from the town of Malibu and nestled in the mountains.  The park was lush and cool and we were happy to get a site, but we ended up next to 3 young, obnoxious couples that kept us awake with their annoying laughing and music (Papa Bear and another camper confronted the arsehole group late in the evening but to no avail – they kept up the noise until 2am.  There were no park patrols and no one to call so we’ve asked the SP for a refund – we’ll see what happens.  We did see to it that the disrespectful shitheads got evicted before we left…)

Tired and a bit grumpy, we decided to only drive an hour up the coast, aiming for a spot at Rincon Parkway County Park Campground.   Despite the elaborate name, Rincon is basically camping on the side of the road, by the ocean, in an assigned spot with no services (for $28).   It turned out to be great, the Bear got to run on the beach and we relaxed with a million dollar view. 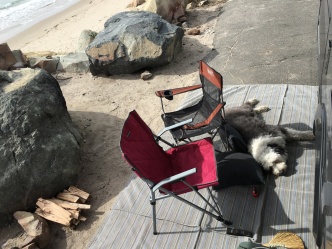 Next stops, Santa Barbara and the Danish community of Solvang.  Skoal!