We arrived at beautiful Shuswap Lake, the skies were blue, and we got a great lakefront campsite.  So after a day of paddling and strolling around the lake, it was finally time to really distance ourselves from all the other ordinary campers.  We baked bread (yes, you can bake something other than meth in an RV).  Now think about it, there’s lots of smells around the campground – pine forests, campfires, outhouses, sizzling bacon, wildflowers – some are actually quite pleasant.  But the smell of freshly baked bread out in nature’s splendour… now that’s raising the bar.

It was time to test out MaBel’s convection oven under full field conditions.  Weather was warm so we brazenly aimed for a same day loaf (normally it takes about 16 hours for the dough to rise).  As it was baking, the sweet smell of rising leaven started to waft out of the oven causing us to quickly switch on both ceiling fans – this wonderful aroma had to be dispersed to the common camper.

Then, just as everything seemed to be going well, the damned oven beeped and switched off.  What the..?  This began a series of restarts and switch offs over the remaining 30 minutes (someone is going to have to read the manual) that had us wondering if this post was going to be titled ‘Bread massacre at Shuswap.’  Half an hour later, we hesitantly pulled it out for inspection and were pleasantly surprised to see that it looked like a reasonable loaf of bread. 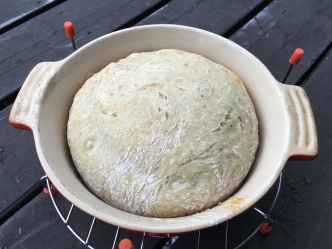 After a few minutes to cool, we cut up a few slices and were pleased that it looked and tasted like a somewhat dense loaf of French bread.  Success!

Epilogue:  Annoyingly, we never overheard one nearby camper offer any comment, such as: ‘Is that someone baking bread?’ or ‘What smells so fabulous?’  Maybe because the town of Salmon Arm is only 8 minutes down the road and has three terrific bakeries, dammit.

3 thoughts on “Showing off at Shuswap”