We’ve met a lot of great people on this trip.  Many times, the encounter starts off with a conversation about the Bear – everybody loves a Sheepdog.  But it was a little different at the Wine Country RV Resort, just outside of Paso Robles.  We decided to stay at the upscale RV Park because we were in serious need of a good laundry.  We booked in using our Passport America membership (giving us a 50% discount), and immediately gathered up all our bags of dirty clothes, then bee-lined to the laundry room.  We filled up 4 machines (2 others were in use) and still had 2 more loads to do.  We went back to the RV for a quick lunch, and then returned to the laundry shortly after the machines had finished.  A woman was there, looking a bit anxious and holding a blanket, saying she was just about to remove our clothes.  We apologized and quickly pulled out our things [Editor’s Note: washing clothes in shared laundry facilities is always crappy, especially when someone leaves their stuff in a machine after it’s done.]  So we were a little sheepish and to make it worse, the woman explained that her cat had vomited on the blanket.

We swapped our clothes into dryers and went back to the RV.  After about 10 minutes, Mama Bear, who’s super picky about her garbs, said she was going back to monitor the machines.  Over an hour later, now a bit worried, Papa Bear wandered over to see if any laundry room brawls had broken out.  Instead, MB and the barf blanket lady (Colleen) were laughing and having a great time.  That was a relief…

Later, Colleen popped over with some free wine tasting coupons along with some suggestions on wineries to visit.  Paso Robles is California’s fastest growing wine region. Back In the 1990s, there were around 35 wineries – now there are over 250 along with 26,000 vineyard acres.  More than 40 wine grape varietals and blends are now produced in Paso, including the area’s signature Zinfandel.

The next morning, Colleen dropped by for a coffee and invited us to join her and (husband) Tim on a tasting tour at some of their favorite wineries.   We enthusiastically agreed and followed them to Daou Vineyards, perhaps the most scenic winery in the Paso Robles Valley. 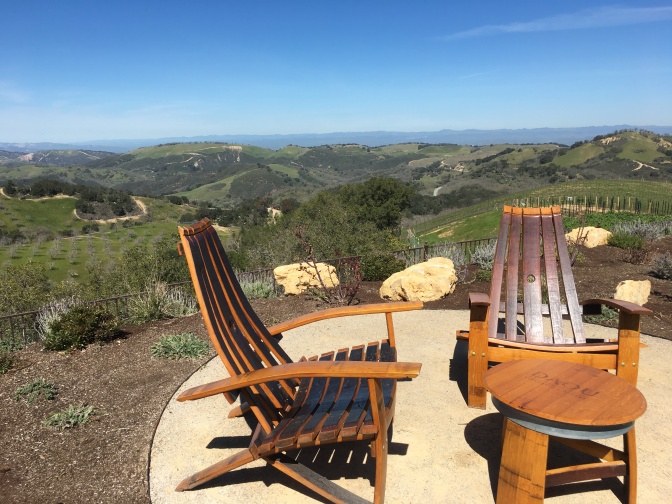 We had a quick free tasting ($30 for non-members), took a few photos, then moved on to Colleen and Tim’s favorite – Adelaida Cellars.  Because of their membership, the generous tastings in the brand new lounge were free.

While at the tasting bar, Papa Bear struck up a conversation with a gentleman who turned out to be one of the family owners – Bob Gray.  Bob enjoyed a distinguished 33-year career as an Air Force pilot and Attaché, while his parents were developing the winery.  After exchanging a few war stories, Bob happily joined our outdoor picnic lunch and brought over a bottle of Adelaida’s reserve cabernet sauvignon for the table.  It was delicious and we later found out the price tag – 90 bucks. (Thank you Bob!)

We then moved down the road to nearby Halter Ranch Vineyard.  Halter Ranch is a state-of-the-art winery.  In 2000, Swiss billionaire Hansjorg Wyss purchased the ranch and enlarged the vineyard to its present 280 acres.  [Colleen arranged for us to have a private tour the following day – see below.]  We had another wonderful tasting session – deciding that their cab sav was our favorite of the day (in the normal price category).

We went back to the RV Park and had a nice BBQ along with some fine reds, hearing all about Tim’s interesting career as a sound and light man for over 30 years on the Vegas Strip.  He also told us how to get our septic tank clean with 40 lbs of ice cubes and dish soap, so that was enlightening…

The next morning, a little weary, we re-grouped for the Halter Ranch tour.  It was terrific. Karlee, our uber knowledgeable guide, took us on an hour-long tour through the brand new facilities including the barrel caves.  According to Karlee, an earlier owner of the land used a section as a small landing strip and Ronald Reagan – then the Governor – used to fly in for visits.  When the estate was later purchased by the next owner, they planted grapevines and initially used the aircraft hanger as the wine production facility.

The ultramodern winery, as it stands today, was created under the guidance of billionaire Wyss, who obviously spared no expense in the equipment, facilities and staff. 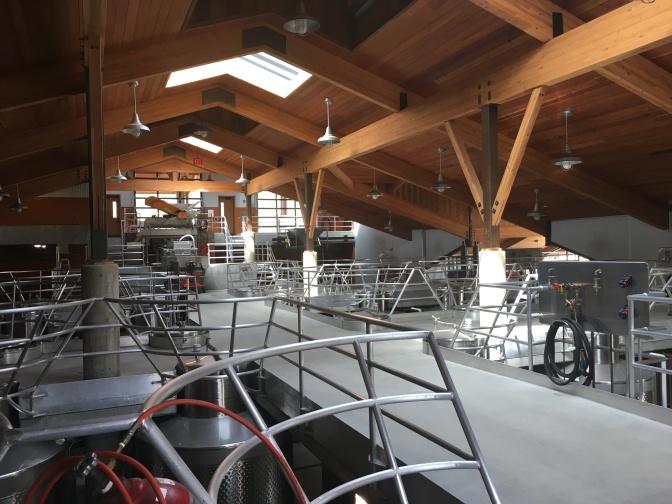 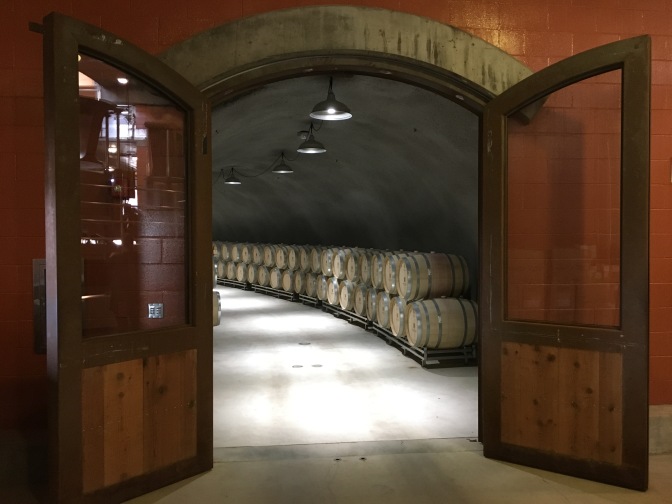 We finished our tour with another tasting and lunch on the back patio.  When saying goodbye to our new friends Colleen and Tim, they presented us with a bottle of wine and some beautiful gifts.  We were surprised but so appreciative of their kindness and generosity.  Many thanks again and hopefully you guys will visit us in the Okanagan some day.  And who would’ve thought that cat puke would have led to 2 great days in wine country…

3 thoughts on “Nothing to Wine About”