Having travelled around the dry, barren areas of the US southwest for some time now, we’ve decided there’s 4 general categories of desert: desert with dunes (White Sands National Monument), flat desert with nothing but rocks (Quartzite), desert that’s been developed through dams and reservoirs (Lake Mead Recreation Area, Lake Havasu), and desert with spectacular rock formations (Mojave, Joshua Tree).  These wholly unscientific groupings could be summed up another way – desert that’s interesting and desert that’s boring.  All but Quartzite fall into the interesting category.

We left Quartzite, which still really puzzled us.  There’s thousands of people living down there with their $300 – 500k, 40 foot motorhomes with attached trailers and ATVs, and they camp there for the winter – a massive gravel pit – only because its free.   Weird.

We moved westward and stayed at 2 pretty good campgrounds: Buckskin Mountain State Park and Cattail Cove State Park.   Both were on the Colorado River and each had terrific hiking trails.

We then proceeded a short distance north to Lake Havasu City.  Lake Havasu, like Yuma, is an all-services town that caters to Snowbirds, but it has one principal attraction: London Bridge.  This particular London Bridge, which at one time spanned the Thames, is actually the second to have been built in the English capital.  The first bridge was completed between 1176 and 1209, and for about 250 years, displayed the heads of traitors at the southern gateway (this practice was finally stopped in 1660 with the restoration of King Charles II).  The original bridge was finally replaced in 1831.  But as time passed, bridge number two began sinking at a rate of 1 inch every 8 years (it wasn’t designed to withstand 20th Century vehicular traffic).   So in 1967, London Council put the bridge on the market and in 1968, the winning bid went to Lake Havasu City founder Robert McCulloch for $2,460,000.

Okay, it’s kind of interesting to think that this structure used to be in London but it wasn’t the grisly bridge that once had William Wallace’s head on it.  That would’ve been cool.  Instead, they bought the one that was sinking into the river.   Maybe we were missing something because it’s Arizona’s second biggest tourist attraction after the Grand Canyon.   We went to the London Bridge Visitor Center, took a couple of photos, drove across it, then moved on…

From Lake Havasu, we continued north to Lake Mead Recreation Area and camped at Katherine’s Landing for 3 nights.   This was a good (primitive) campground that was crawling with coyotes.  We saw a couple of them prowling around the campground and could hear many more howling at night.  Needless to say, they steered well clear of the Bear (they probably saw the cartoon).   On our way back down, we crossed over to Laughlin, Nevada and promptly lost $20 in a very smoky casino.

Back on the Arizona side, we also stopped in nearby Oatman, which is billed as a mining ghost town, and is located along historic Route 66.  Oatman, however, is best known for the wild donkeys (burros) that wander in and out of town.  We encountered a ‘donkey jam’ as we approached the outskirts.

Oatman was founded in 1906 when gold was discovered, producing over 1.8 million ounces.  But by the early 1930s, the boom was over and the mines were closed.  Now the small town survives as a tourist attraction, relying heavily on the cranky donkeys, which will bite and kick if you piss them off (according to the locals, a German Shepherd was killed last Fall).

We departed Arizona and crossed into Needles, California, gasping when we saw the gas prices ($3.79 / gallon), which were more than a dollar higher than Arizona (they did drop a bit as we moved west).  We drove northwest into the Mojave National Preserve and found an excellent place to set up – Hole in the Wall Campground.

Again, we discovered terrific hiking trails and climbing areas including one that went through the hole in the wall with the assistance of some well-placed iron rings. 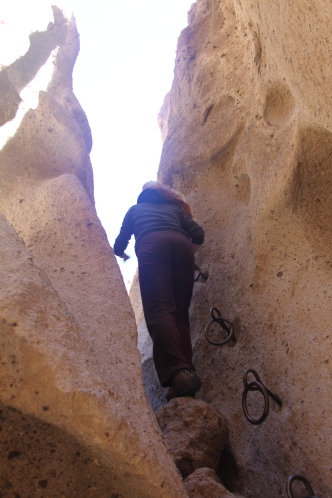 There’s certainly a lot of desert out there, mostly good (except Quartzite).  Next stop for us, Joshua Tree National Park.