To better appreciate the United States of America, including all its wonder (and weirdness), you really need to explore one of its key defining moments – the Civil War.   This war (1861-1865) between 11 southern states and the Union, to some degree, still resonates today, particularly in the south.

Perhaps less well known than the battle of Gettysburg, the campaign for Chattanooga was crucial.  President Lincoln believed that taking Chattanooga was as important as taking Richmond (the capital of the Confederacy).  The small city lay on the banks of the Tennessee River where it cut through the Appalachian Mountains, allowing four major railroads to converge.  If the Union captured Chattanooga, it could cripple Confederate supply lines and strike at the industrial heart of the Confederacy.

The Chickamauga and Chattanooga National Military Park is split into two separate areas: one in nearby Georgia featuring the Chickamauga battlefield and the other at Lookout Mountain in Chattanooga, Tennessee.  We visited the Chickamauga Battlefield, which features an impressive Visitor’s Center including an excellent film and exhibits as well as a 7 mile self-guided driving tour (and you can receive a running commentary by dialing into a number with your phone).  Cost of admission – free!  The Bear, sporting her Service Dog attire, was allowed special entry and was treated royally by the staff.

The battle for Chickamauga (named for the river) lasted 3 days and represented 2 of the bloodiest days of the entire Civil War.  Of the 58,000 Union and 66,000 Confederate troops that engaged, there were over 20,000 casualties.  Only the battle of Gettysburg had more loss of life. 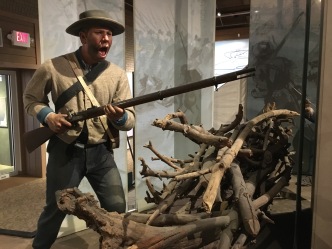 As we proceeded on the self-guided auto tour, it was striking how many statues, monuments and points of interest are set along the way.  You could spend days reading all the information boards and plaques, many of which are set back in the woods at precise locations. 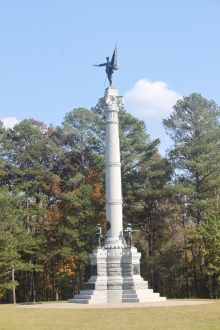 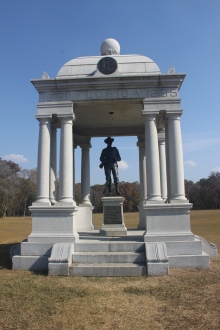 It’s a phenomenal national park – one that poignantly illustrates, not only the hallowed ground, but the terrible sacrifices that men on both sides made.  Most definitely worth a visit.

One thought on “Chickamauga and Chattanooga National Military Park”