It was the summer of 1974 and a young Papa Bear decided to make a homemade raft out of garbage bags and attempt a crossing of one of the local lakes.  This was an ambitious endeavour for a foolhardy 10 year old, but this is what kids did back in the 70s (before Xbox and iPads) – they designed and built stuff like self-propelled plastic bag barges and other hair-brained contraptions.  Now if memory serves, that project ended in failure, only because the bags didn’t live up to the lofty assurances extolled by the ‘Man from Glad.’  But the young Papa Bear knew, deep down, that this idea had potential…

Roll the clock ahead four decades and out comes the AirBed, a brand new product billed as a rapidly inflatable sofa that can be used anywhere, including on water.  Holy crap, this was it!  This was essentially the modern version of the old 1974 ‘Glad Gondola.’  So after arriving in Oshawa for the seems-like-forever family visit with the in-laws, Papa Bear casually showed Nana a video of this sleek gizmo.  She watched, then rolled her eyes and said, ‘I already ordered you one, you big jerk.’  [Editor’s note, Papa Bear’s mother-in-law, despite being a bit crusty and gassy-arsed, is unbelievable at finding the latest cool gadgets.]  Papa Bear was thrilled, saying ‘Really, you bought me an AirBed?  That’s incredible.  I’ve been seeing these things advertised everywhere.  That’s fantastic!  What colour did you order?’  Nana dug out the order form and handed it to Papa Bear, who scanned the details.  What the…?  Brown?  Nana ordered a brown one when all the videos show people lounging around on bright, cheery AirBeds, like neon orange, or lime green, or firetruck red…  ‘Brown, you ordered a brown one?  Yup she said, ‘it’s like a big turd.’

So for the next 2 weeks, we eagerly waited for the Big Turd.  Then, just in time for the (early) family Christmas celebration, it arrived.

The AirBed comes in a drawstring carry bag with shoulder strap.  The AirBed itself is wholly simple in design – it’s basically a large, lightweight 2 chamber tubular dry-bag made from parachute nylon with a plastic inner membrane.  There were no instructions but the concept was pretty straightforward – just scoop air into the bag, then roll the end closed and clip the locking buckle. 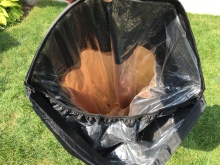 Having watched videos showing the AirBed being inflated in about 3 seconds, this seemed like a piece of cake, until we gave it a try…

Numerous attempts, first inside the house (which just about ended in disaster), then outside on the front lawn, all fell short of getting the desired loft and level of firmness.  So, remembering the heartbreak of 1974, Papa Bear gritted his teeth and spun the giant diarrhea-colored bag through the air, whirling like a man possessed, and snapped the end shut.  Success!

But instead of a turd, it looked more like a giant vagina.

We all had lots of laughs trying out the big turd / giant vagina (Nana almost peed herself) but no one stole the show like Opa, who in 33c sweltering heat, tried 3 times to get himself positioned without ever coming close to looking comfortable. 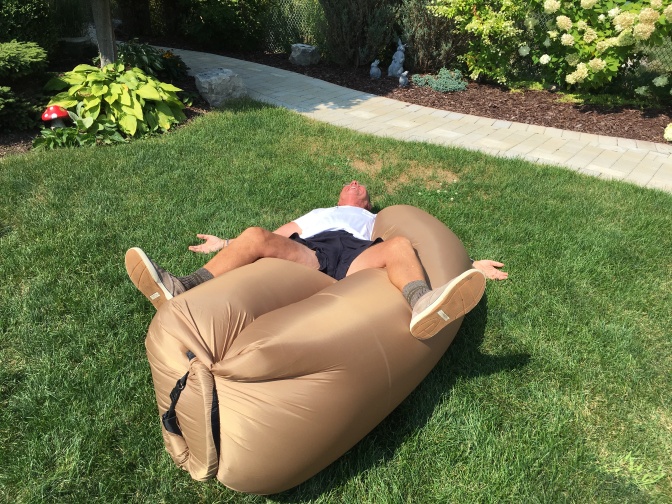 4 thoughts on “The Big Turd”