As previously stated, we don’t make any money for endorsing products.  We just like to pass on honest feedback from field-testing gadgets and equipment we’re using during our journey.  So with that disclaimer, here’s our take on the Weber Q series – 1200 portable gas grill.  Straight to the point – it’s the BEST portable BBQ on the market.  We’ve been using this model now for over 8 weeks and couldn’t be happier.

Prior to our departure, we had one of the older Weber ‘Baby Q’ models which was a precursor to the 1200.  It served us well for nearly 10 years.  But as with any well-used BBQ, its time had come so we updated to the latest version [thanks to Papa Bear’s mother-in-law, who bought it for his birthday].

The 1200 has a few improvements over the Baby Q: a higher lid, a lid thermometer and fold-out side tables.  But other than these 3 new features, and coming in a variety of colours, its basically the same trusty design.  What’s great about the Weber 1200 is the quick setup and awesome cooking surface.  We also have the Weber stand that goes with it, which is handy when we aren’t at a campsite with a picnic table (and it’s just not civilized to BBQ on the ground unless its over a campfire…).  The folding stand sets up in about 10 seconds.  We also use a 5lb propane tank instead of the ridiculously expensive and environmentally unfriendly green Coleman bottles.

Now the big difference between the 1200 and a full-size stainless BBQ is that you have to keep the lid down to get the grills hot and maintain the heat.  That applies when you’re cooking as well.  Put the food on, close the lid and don’t touch it.  The lid being closed is integral to the BBQ’s performance.

We like to heat it up to 400F for just about all types of cooking.  It takes about 10 minutes to reach this temperature before adjusting the control from high to medium, then it’s ready to start cooking.

Here’s a tip: all we ever use is a good pair of stainless tongs and a paint scraper.  Forget those fancy BBQ utensil sets – they’re way too big for the 1200. 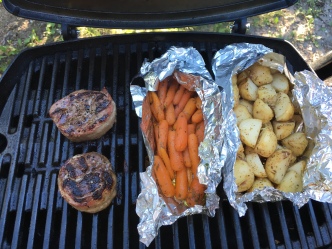 Tonight we bbq’d bacon-wrapped filet mignon steaks, accompanied by rosemary garlic potatoes and tarragon honey-infused carrots (see recipes below).  We’ve yet to be disappointed with a meal off this little BBQ-wonder.  It packs a mighty 8,500 BTUs, has a low-maintenance stainless steel burner, electronic ignition, two folding side tables, and side-by-side porcelain-enameled cast-iron cooking grates.  It sells in Canada for about $270 (or about $190 in the US).  We’ll say it again, there ain’t a better little (propane) BBQ out there.

Pick up a pound of baby potatoes, mixed colours if possible.  Cut into bite sized pieces and toss in a bowl with good quality olive oil.  Add fresh minced garlic, grated parmesan cheese, dried (or fresh) rosemary, salt and pepper and toss again.  Seal in tin foil and BBQ for 30 minutes at 400F.

Pick up a small bag of baby carrots.  Toss in a bowl with olive oil, 1 teaspoon of honey, 1 teaspoon of dried tarragon, salt and pepper.  Seal in tin foil and BBQ for 25 minutes at 400F.  Enjoy!