As promised, here’s our semi-professional culinary review of Smithers’ competing sausage establishments: Rudolph’s and (just across the street), The Sausage Factory. The mountainside town of Smithers has an obvious German influence so we were pretty sure the locally produced snags were going to be decent.

We first dropped into Rudolph’s.  It was relatively small with a modest selection of sausages.  A lot were packaged and in the freezer.  They also had other sorts of meat (steaks and some good looking smoked pork chops) but there wasn’t a huge selection of fresh sausages.  Unfortunately, they did not carry a good assortment of mustards – an essential accompaniment to a cooked sausage.  Also noteworthy, we were the only ones shopping in Rudolph’s and it was midday on Saturday after the July 1 holiday. 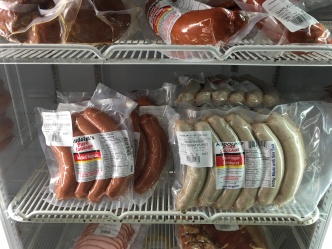 So after browsing the shelves, we crossed Main street and over to The Sausage Factory.  What a difference!

The shelves were teeming with all varieties of fresh sausages and the store was packed with shoppers.  We counted at least 7 staff busily stacking shelves and helping customers  (compared to the one lonely clerk at Rudolph’s) so it was clear where ‘Smithereens’ prefer to buy their links.  After getting some advice from a rather large butcher (who may have been the owner), we decided on the plain weisswurst, weisswurst with cheddar and jalapeño (both were on special), as well as the farmer’s sausage – apparently their specialty.  They also carried an excellent assortment of German mustards at very reasonable prices.

But our critique would only be complete after sampling the product.  We returned to the campsite and decided to try the weisswurst with cheddar and jalapeño first, cooked on the BBQ, along with two varieties of mustard – Senf (hot) and Lowensenf (sweet). 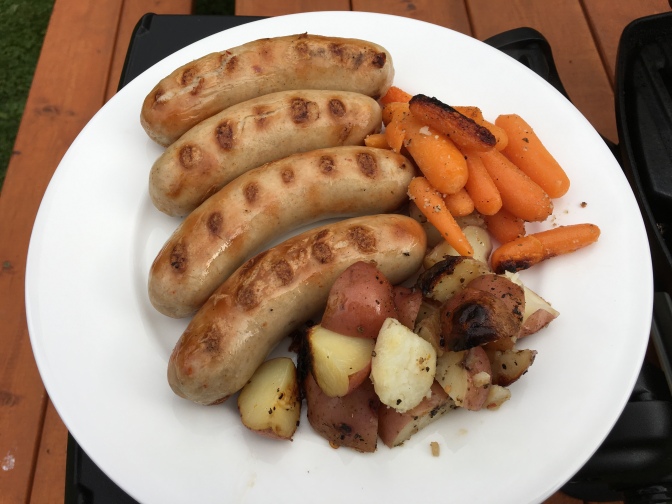 Delicious!  Flavourful with just the right amount of spice.  Hands down, The Sausage Factory wins the sausage-makers battle with Rudolph’s.

(Editor’s note: this plate was paired with some excellent ‘Prospector’s Peril’ Blonde Ale from the Barkerville Brewing Co.  Besides good quality mustard, german-style sausages must be consumed with good beer).