Check out the Stowaway 2 cargo bin at https://www.stowaway2.com
Billy Barker, hand-digging through layers of soggy, worthless gravel, discovered gold in Williams Creek at a depth of 52 feet in 1862.  This was the greatest creekside gold nugget deposit the world had ever seen and led to the establishment of Barkerville.  This discovery was instrumental in the building of the province of BC and its joining Canadian confederation in 1871.  So with all that history, and a keen interest in gold (despite our poor performing shares in Barrick), we made Barkerville a must-see stop on our cross-Canada journey.  The town is more of a museum than a theme park, featuring 107 heritage buildings and 62 heritage replica structures.  This time of year (summer) there’s lots of actors in period-dress roaming the town and offering insights into the early history, particularly the incredible hardships that thousands of gold-seekers went through. 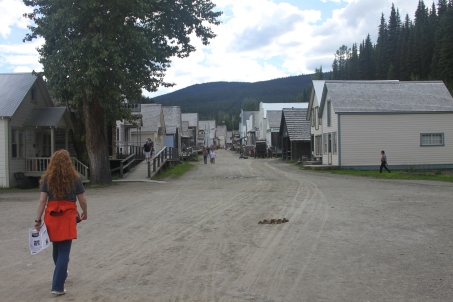 All of it is great, EXCEPT the stupid no dog policy.  We knew before going that Barkerville didn’t allow dogs but we went hoping to figure something out.  Upon arrival at the entrance office, there’s a large sign stating ‘Beware – extreme heat can kill dogs.’  Geez, good to know, thanks for the insight!  So now that its 29c and the sun is baking down, what does Barkerville do to accommodate dog-owners?  They provide 4 foot outdoor kennels at the end of the parking lot.  We drove past these canine prisons on the way in and heard the howling inmates as we passed by.  What is the Barkerville Heritage Trust Board thinking?  Are they morons?  They boast receiving 60,000 visits annually but you could envision that number hitting 6 figures if they allowed dogs.  Almost every retiree in an RV (part of the Baby-boomer cohort and massive demographic) has a dog.  This represents thousands of travellers looking to spend their money and see worthy and accommodating sights.  Another ‘ghost town’ in BC – Fort Steele – permits dogs so there’s no good reason for this policy other than stupidity.  Hey Barkerville, if you’re going to be dumb asses, why not ban howling babies and slow-moving seniors because they’re way more annoying than a well-behaved dog on a leash.

Okay, that’s our rant.  Fortunately, we bumped into our friends, ’The Lesbians’, who looked after the Bear while we toured around the township.  So here’s the bottomline: Barkerville is a really neat place for anyone interested in preserved history.  It costs a reasonable $15 for a two-day entry pass.  There’s a mix of historical sites, accommodations and restaurants on site that replicate ‘gold rush living’ a century and a half ago.  The historic township just happens to be governed by non-progressive halfwits.  So if you’re planning to visit Barkerville in the near future, don’t come if you have a canine companion – they’re canist (racist against dogs).  Go to Fort Steele in the Kootenays.  And there’s less bugs.